Waiuku arrived fully fledged on Saturday, attending briefing in our yacht club hoodies, after sussing out the local playgrounds. We settled in after briefing for an early night, getting ready for the weeks’ worth of sailing ahead of us. We were up with the sparrows on Sunday, getting out on the water at 9:45 and full of nerves. By 10:30 we had started our 13 races of the day, sailing in good wind against some strong teams. We snuck in a win before returning to the Ocean Rogue, our changeover barge, full of teens!
By Monday we were still feeling strong, unfortunately, the wind had other intentions – it was waning. After hanging around for a few hours on shore, we were sent out to some breeze, allowing us to race our races, with some stiff competition. The wind abandoned us halfway through the second race, leaving us becalmed, finishing the race with only 15 seconds to the finish.
Regardless of the winds intentions, we were sent out on the water at 9:15 on Tuesday. After 6 hours and multiple course changes, the wind came to the game, breaking up our fraternising with the other teams for some… racing! We had a very competitive race against Glendowie, unfortunately we couldn’t push through for the win – we did learn a lot though!
We had a late start on Wednesday, respecting our ANZAC Soldiers. The stress levels were high that morning, as we prepared for the race we had to win. The team pulled through, landing a first, second and sixth! We were pumped for our next race; the wind was smiling down on us – especially when one of the helms fell out pre-start! The start was mayhem, with all but one boat over the line. Unfortunately, the other team had better boat handling skills and beat us to the win – nevertheless we learnt a lot. Our last race had less competition, giving us a calm end to the day. Our team relaxed on the beach after sailing, before heading in for another early night.

On Thursday morning our favourite flag – the AP – hung limp from the top of the flagpole, so we ventured up the hill to the donkey farm. After a relaxed wander down the hill, the team returned to camp for a swim and a water fight in the still tide. After a game of bull rush, we scrubbed up and headed out to dinner – I think it is fair to say that we represented Waiuku proudly! A game of spotlight ended the night on a high for us all.

We woke up sadly on Friday, none of us wanting the week to be over. The wind was stronger today, blowing a fair 15 knots, with some strange things called waves joining the party as well. Our first race was an important one, so stakes were high. After a broken boat and a quick change, we were at the start and rearing to go. We sailed hard and took out the top 3 places! We jumped onto our hometown boat, the Jane Gifford, the flat-bottomed scow that frequented our home water for many years. After hiding from the wind, we were up again, with tough competition and unfortunately no wind. We sailed hard in our next two races, taking the wind in the first, and racing hard through the second one. And that was it! Our week was over!
We headed back to shore, to derig the boats for one last time before scrubbing up for prizegiving. In our number ones we raced into the warehouse to pick up the necessities before heading into dinner. We all turned out well, dressed up in our formals instead of sailing gear for once! After dinner we had a final game of spotlight before heading in for one last night.
We fare welled all our new friends, packed up camp, and drove our tired, sore, salty and smiling selves home. Overall, we placed 31 out of 32 teams, giving us the win we wanted. We learned so much in one week, and over the 5 months we have been sailing in these boats, we have grown as sailors and as people, and we owe a massive thankyou to the Waiuku Yacht Club Committee for getting us on the water, the Waiuku Rotary Club, for their support financially, getting us the boats and a chance, and the Counties Manukau Sport Fishing Club for supporting us in getting to the regatta. Also, a huge shout out to everyone that donated towards our new sails, and our families, for cheering us on! 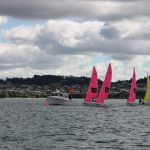 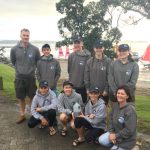 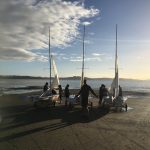 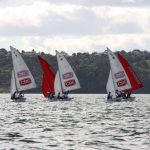 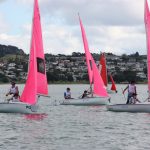